The following information is NOT a complete discussion of Wire Rope & Wire Rope Slings.

What follows is a brief outline of the basic information required to safely use wire rope & wire rope slings.

Wire ropes wear out. The strength of the wire rope begins to decrease when the rope is put in use, and continues to decrease with each use. Never overload a wire rope. This means never use the rope where the load applied to it is greater than the working load. Never "shock load" a wire rope. A sudden application of force or load can cause both visible external damage and internal damage. There is no practical way to estimate the force applied by shock loading a rope. The sudden release of a load can also damage a wire rope.

Lubricant is applied to the wires and strands of a wire rope or wire rope sling when it is manufactured. This lubricant is depleted when the rope is in service and should be replaced periodically. Regular, periodic inspections of the wire rope, and keeping of permanent records sign by a qualified person, are required by OSHA for almost every wire rope installation. The purpose of inspection is to determine whether or not a wire rope or wire rope sling may continue to be safely used on that application. Inspection criteria, including number and location of broken wires, wear and elongation, have been established by OSHA, ANSI, ASME and similar organizations. If in doubt, replace the rope. An inspection should include verification that none of the specified removal criteria for this usage are met by checking for such things as:

In addition, an inspection should include the condition of sheaves, drums, and other apparatus with which the rope makes contact. When a wire rope has been removed from service because it is no longer suitable for use, it must not be reused on another application. Every wire rope user should be aware the the fact that each type of fitting attachment to a wire rope has a specific efficiency rating which can reduce the working load of the rope assembly or rope system, and this must be given due consideration in determining the capacity of a wire rope system.

Some conditions that can lead to problems in a wire rope system include:

Vertical - A vertical or straight attachment is simply using a sling to connect a lifting hook or other device to a load. Full rated load of the sling may be used, but never exceeded. A tagline should be used on such a lift to prevent rotation which can damage the sling. A sling with a hand-tucked splice can unlay and fail if the sling is allowed to rotate.

Choker - Choker ​hitches reduce lifting capability of a sling. This method of rigging affects the ability of the wire rope components to adjust during the lift, places angular loading on the body of the sling, and creates a small diameter bend in the sling body at the choke point.

Basket - Basket​ hitches distribute a load equally between the two legs of a sling, within limitations imposed by the angles at which legs are rigged to the load. (See discussion of sling angles below.)

Rated Load of a sling is different for each of the three basic methods of rigging (See graphic above). These rated loads are available from your wire rope sling supplier and may be indicated on the tag attached to the sling at the time it is fabricated. (If requested by the user). A hand tucked eye splice can unravel and fail if the sling is allowed to rotate during use. Never "shock load" a sling. There is no practical way to estimate the actual force applied by shock loading. The rated load of a wire rope sling can easily be exceeded by a sudden application of force, and damage can occur to the sling. The sudden release of a load can also damage a sling. The body of a wire rope sling should be protected with corner protectors, blocking or padding against damage by sharp edges or corners of a load being lifted. Sharp bends that distort the sling body damage the wire rope and reduce its strength.

Any angle other than vertical at which a sling is rigged increases the loading on the sling. A sling should be given a visual inspection before each lift or usage to determine if it is capable of safely making the intended lift. Whenever a sling is found to be deficient, the eyes, or other end attachments, must be cut and the sling body discarded to prevent further use. A sling eye should never be used over a hook or pin with a body diameter larger than the natural width of the eye. Never force an eye onto a hook. The eye should always be used on a hook or pin with at least the diameter of the rope.

Sling Angles Affect the Load On The Legs of a Sling

Sling angle (also called angle of loading) is the angle measured between a horizontal line and the sling leg or body. This angle is very important and can have a dramatic effect on the rated load of the sling. As illustrated above, when this angle decreases, the load on each leg increases. This principle applies whether one sling is used with legs at an angle in a basket hitch, or for multi-leg bridle slings. Horizontal sling angles of less than 30 degress shall not be used.

A Wire Rope Is a “Machine” With Many Moving Parts

A wire rope is a machine, by definition: “An assemblage of parts that transmit forces, motion, and energy one to another in some predetermined manner and to some desired end.” A typical wire rope may contain dozens - even hundreds - of individual wires which are formed and fabricated to operate at close bearing tolerances one to another. When a wire rope bends, each of its many wires slides and adjusts in the bend to accommodate the difference in length between the inside and the outside bend. The sharper the bend, the greater the movement.

The core may be either a fibre rope, an Independent Wire Rope Core (IWRC), which is actually a smaller wire rope, or a strand similar to the outer strands of the rope. Only an IWRC or strand core contributes strength to the rope. An IWRC normally only provides 7.5% of the wire ropes Nominal Strength.

The greatest differences in wire ropes are found in the strands, which may vary widely in the pattern and number of wires which are laid together. The wires of a rope may be made of various metals, including steel, iron, stainless steel, monel and bronze. The material of which the wires are made is the primary determinant of rope strength. By far the most widely used metal is high-carbon steel. 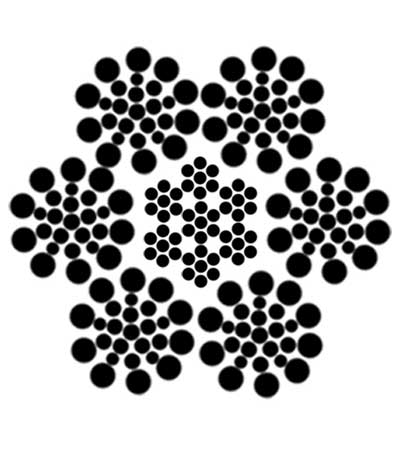 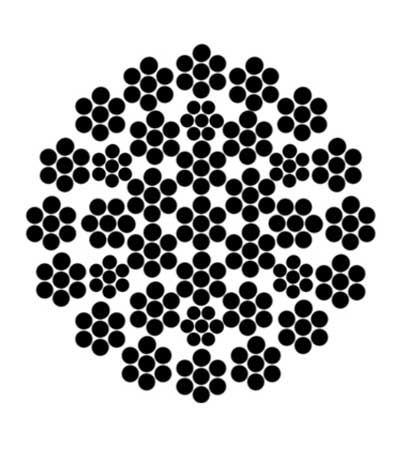 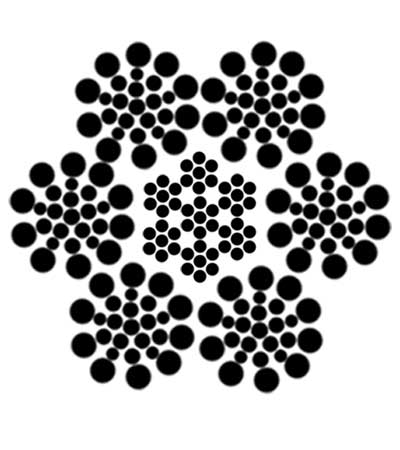 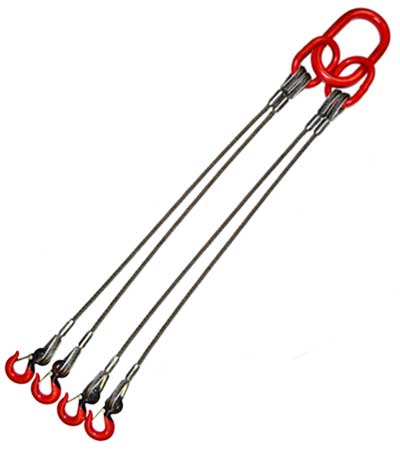